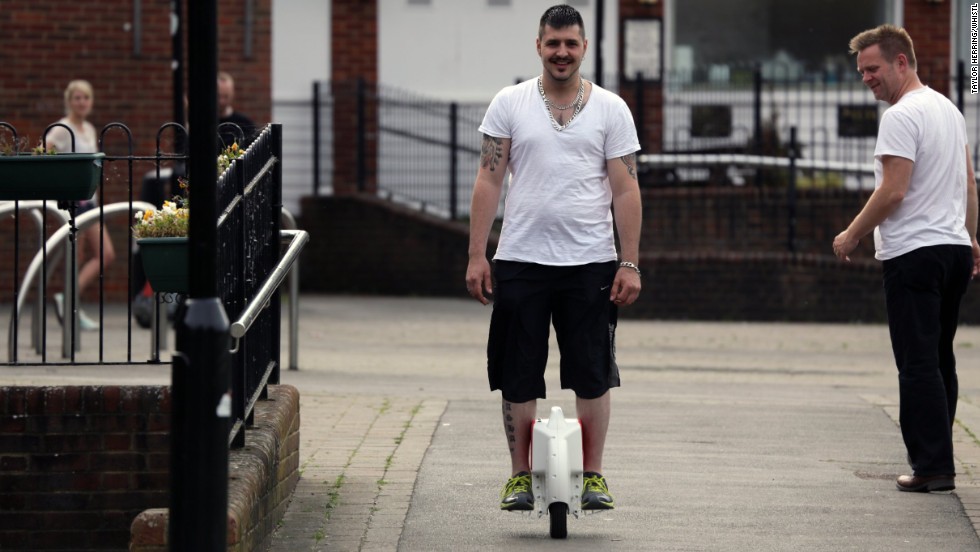 Two wheels good, one wheel better? – Created by UK company Airwheel, they use use internal stabilizers to allow a rider to steer and keep balance. 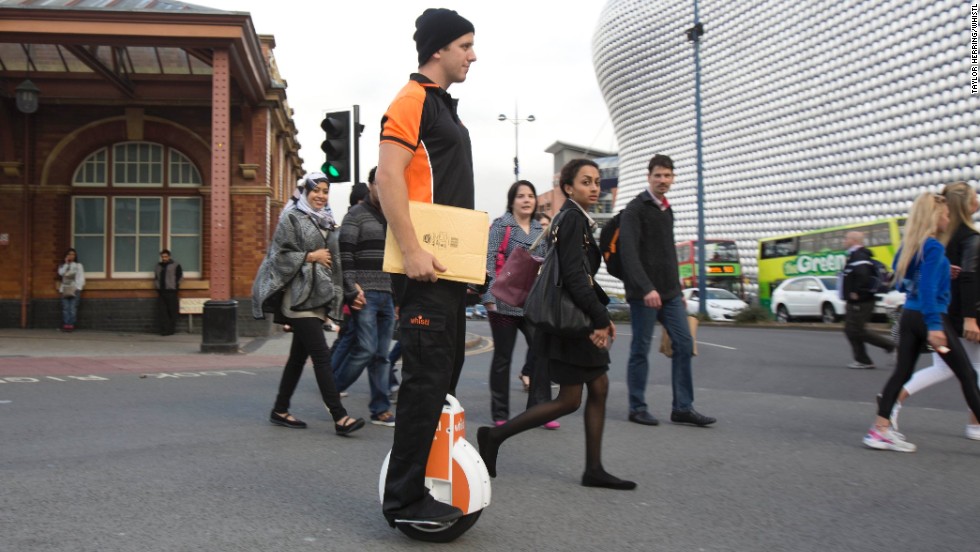 Two wheels good, one wheel better? – A “postie” trials the Airwheel unicycle in Birmingham. The company says the devices are now becoming popular with urban commuters. 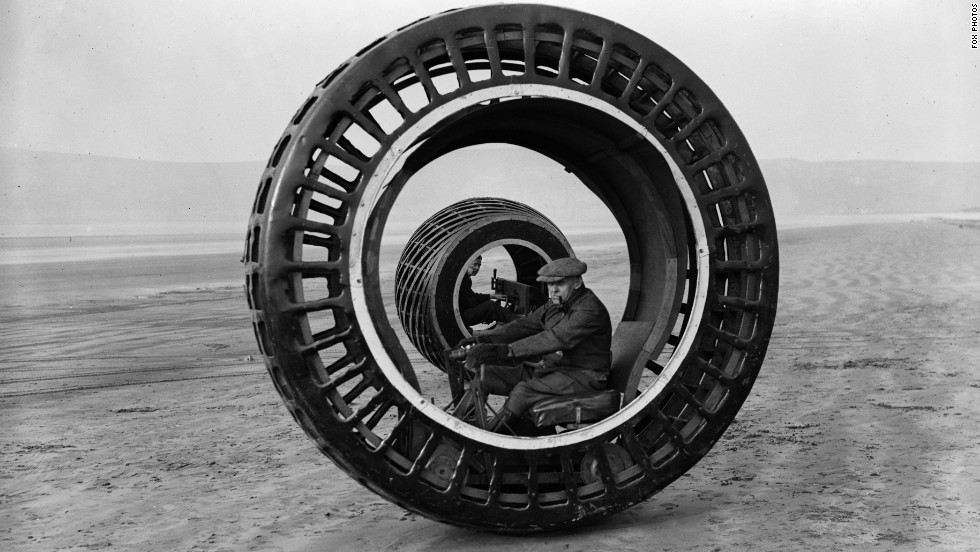 Two wheels good, one wheel better? – Early experiments with one-wheeled transport included the “dynasphere” — an electronically powered monowheel from the 1930s. Unfortunately the device had a tendency to “gerbil,” sending the driver racing around the wheel frame if the device braked too suddenly. 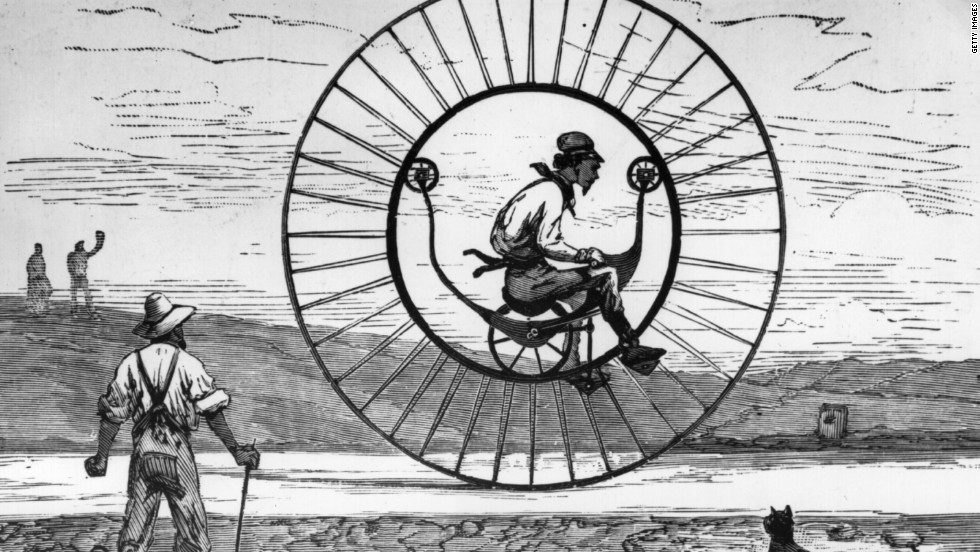 Two wheels good, one wheel better? – A monocycle invented by Langmark and Stuef of California from 1895, consisting of a cycle moving within a large wheel. One-wheeled transport has traditionally been difficult to steer. 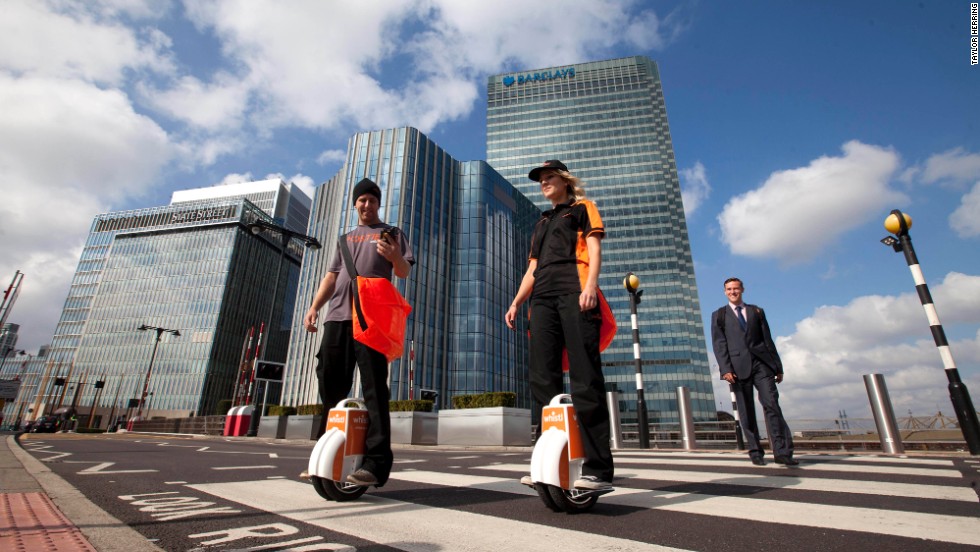 Two wheels good, one wheel better? – The postal delivery service Whistl is trialing electric unicycles for 100 of its mailmen across the United Kingdom.
Hide Caption

Despite its obvious advantages — there’s less rubber on the road, there are fewer moving parts and both your hands are free for carrying the shopping — one-wheeled transport has had a patchy history.

From the impressive and futuristic “dynasphere” prototype of the 1930s to the circus unicycle, mono-wheeled transport has suffered a fatal design flaw: it’s difficult to steer.

Typically in a two-wheeled vehicle, one wheel provides the motor force while the other does the steering. In a mono-wheel or unicycle, the wheel has to do both jobs.

Now, thanks to more advanced, cheaper and smaller gyroscopes, all that is about to change.

Companies such as Ryno Motors in the United States and Airwheel in the UK are producing unicycles with internal stabilizers that will scoot a passenger along at 12mph.

Portable, cheap to run and fun to ride, Airwheel is now the supplier of the Chinese-made unicycles for the English postal service Whistl which is trialing a fleet for its mailmen in London, Birmingham, Manchester and Liverpool.

But it’s not just mailmen that are giving the futuristic transport the thumbs up. City commuters are now using them to get that final leg from the Tube station to home.

“They immediately put people in mind of the hoverboard in ‘Back to the Future,'” said Simon Parham, CEO of the London-based company. “In many ways, it feels like technology and science is headed in that direction; towards that mode of transport.”

The electric unicycle has an effective range of 28 miles, can recharge its batteries when it goes downhill and is rugged enough to gutter jump and even take off road.

“It really feels like you’re gliding on nothing,” said Parham, a former stuntman in James Bond films. “You could relate it to something like snowboarding or skiing but obviously you’re doing it on concrete and gliding around at your leisure rather than requiring mountains and snow.”

He said that he could see the efficacy of and market for the devices immediately and hadn’t even ridden one before he decided to become a distributor for the gadgets.

“We were aware that people might want them just for fun but we’ve been somewhat overwhelmed by how interested business commuters have been in using them to drive into the center of cities or to get to the train station.”

Some customers, he said, had found uses for the electric unicycle that his company had not even imagined.

“We got an email from a disabled user who had mobility problems who was now able to go on nature walks with her partner — they would hold hands and actually go quite some distance off-road with these which really opened up a new lease of life for her,” Parham said.

Already designers are looking at unicycles that can go further, faster and are even more lightweight and easier to ride.

“Compared with a Segway for example they’re already so lightweight,” he said, referring to the electric two-wheeled personal transporter. “I can’t imagine picking up a Segway, whereas with an Airwheel, you can scoot to your station, stick it on the overhead compartment, get to your destination, take it down and scoot to work.

“It’s a fun alternative means of transport and there’s a market for it.”

The company sells a twin-wheeled version, which is easier to learn to ride, and a smaller one-wheeled version that Parham says everyone has been able to negotiate after a sometimes shaky start.

Like a Segway, the driver must shift their weight forward to make the unicycle accelerate and lean backwards to slow down and brake.

But the proof of the pudding, as they say, is in the eating and Airwheel say that “posties” — as mailmen are called in Britain — have taken to its ease of use and rugged go-anywhere design.

The chief executive officer of Whistl, Nick Wells, said in a statement that the postal company had a long track record of innovation.

“This radical new delivery device grabbed our attention,” Wells said. “Our teman have had fun getting to grips with the gadget and it’s gone down well with customers too.

“We are committed to ongoing efficiency and if the trial proves successful then the Airwheel will be adopted by Whistl posties across the United Kingdom.”