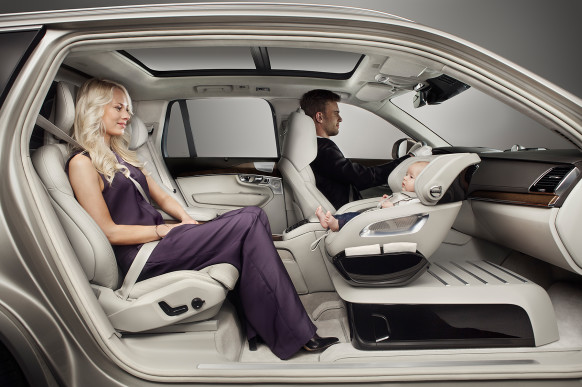 SO YOU’RE RICH. You have a chauffeur because driving yourself is for the hoi polloi. But you also have a young child. How best to transport both you and your progeny in comfort, style and safety?

The Swedes have a solution.

For wealthy customers who feel like taking their kids places, Volvo changed up its 2016 XC90 “Excellence” edition, the four-seat, extended legroom version of its usually seven-passenger XC90 SUV. But instead of a passenger seat up front, there’s a rear-facing, swiveling baby seat.

Frankly, it looks a bit absurd. But for those of us with kids, the idea of a rear-facing baby seat directly in front of Mom, Dad or, perhaps more likely for the jet set, the nanny, is worth consideration.

This is basically a Mommyfied version of Volvo’s XC90 Lounge Console concept from earlier this year. That version replaced the front passenger seat with a combination storage/ottoman/television/work table.

Volvo wants to eliminate crash-related fatalities in its new cars by 2020, and approaches the problem from several angles. It’s working hard on autonomous driving tech, with atest program using real customers planned for 2017. It hasextensive research arguing children of all ages should have special seats, and to that end includes integrated booster cushions in many of its vehicles. It says small children, up through age 3 or 4, should travel facing rearward because of the lack of muscular strength in their necks and the disproportionate head size and weight in relation to the body. 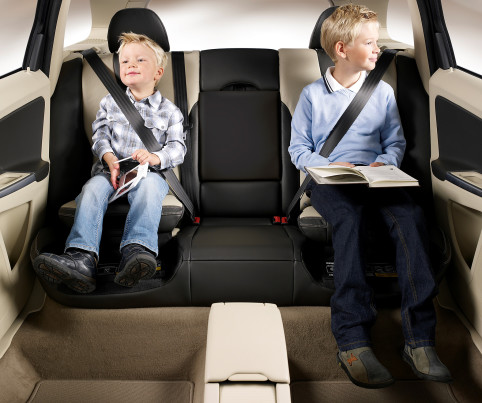 “Being able to maintain eye contact with your child from the rear seat… would go a long way towards making life easier for parents taking their small child on a trip, says Tisha Johnson, Volvo’s Chief Designer of Interiors. “Such alternative seating arrangements will become increasingly important as we move towards autonomous vehicles.”

No word on if or when Volvo might build the XC90 Excellence Child Seat Concept. But for its next trick, how about a comfy bed for the family dog?