These Hoverboard Dancers Are The Most Amazing Thing You'll See Today Over the last year, hoverboards have gone from must haves to maybes, and incited a lot of conversation about whether they’re safe — and if their rolling motion qualifies as ‘hovering.’

But there’s no debate when it comes to the skills of British-based hoverboard dance troupe Supernova. They’re so spectacular that all questions are silenced. The four-person group moves in eerie synchronization on their hoverboards, their LED suits flashing as they roll across the stage. Their bodies and feet are covered with tiny blinking lights and scrolling images flicker across them.

Over 20,000 people watched them perform at Birmingham’s NEC arena in April 2016. These dancers are part of the Feeding The Fish collective, a group that uses modern tech to create a new type of art form. This fusion is breathtaking to watch — it’s athletic skillful, and incredibly techie. Formed in 1996, they started performing with LED poi, and glowing juggling clubs, and have gone on to include hoverboards and LED wands in their events. They regularly perform around Europe, at festivals and at corporate gigs.

April 2016 was their first foray into hoverboards and they’re bringing aChristmas themed version of their Zoom dance routine to stages across Europe this year. This new act has been rebranded as Glide About, and it features LED encrusted hoverboards ridden by dancers wearing Feeding The Fish’s custom Video Suits— glowing outfits that scroll through colors and shapes as the wearer rolls around, transforming from Santa to a reindeer in a second.

“The scope for doing a mix and mingle show on hoverboards just seemed so obvious,” said Alix Widing, Artistic Director for Feeding The Fish. “Until now, we’ve performed mainly stage shows – using our own patented Pixel-Poi technology alongside glow-juggling and LED dance – but there’s actually something really fun and engaging about letting the audience interact with our performers and get a closer look at the tech. Our dancers don’t just glide around like robots, they dance in ‘hold’ on hoverboards, perform lifts on hoverboards and can even interact with a crowd on hoverboards.” 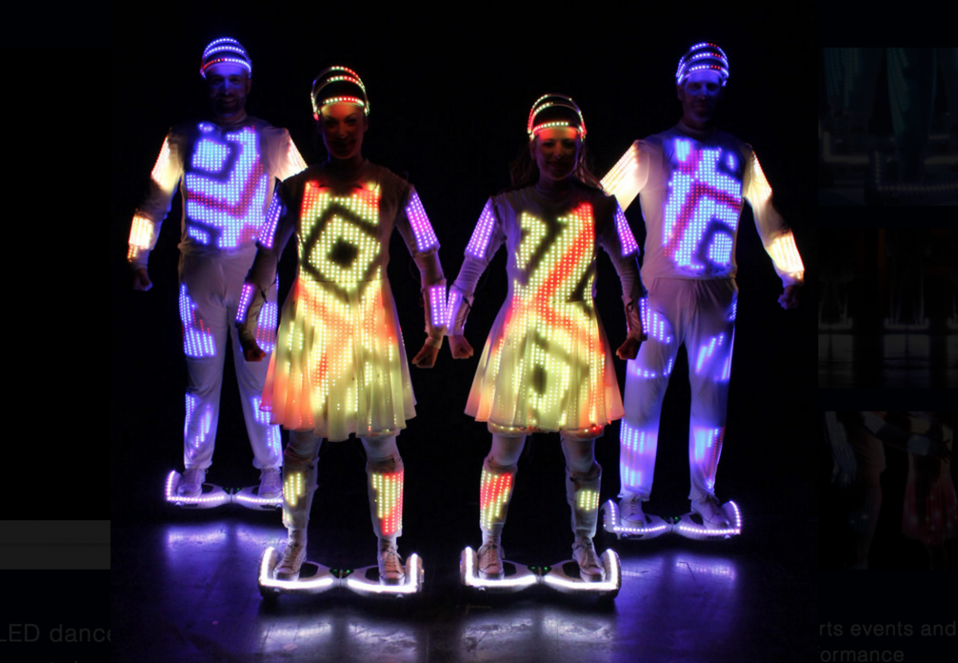 “People are wowed by pictures, bright shiny things,” says Prisna Nuengsigkapian, CEO of FlowToys, a flow art prop company. She says, in part, that Feeding The Fish’s allure is based on their location —-there’s more demand for brighter props and flashing light shows in Europe than America. 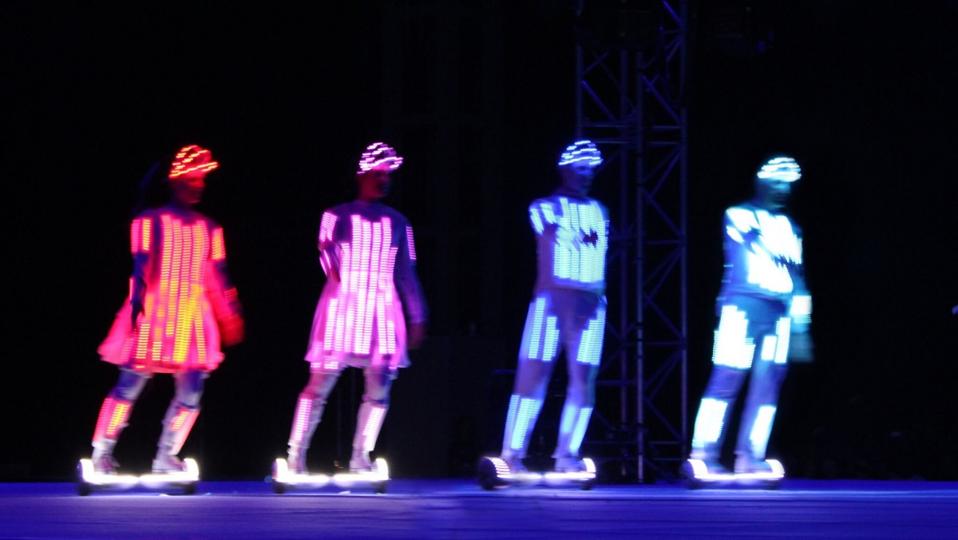 They’re not the only people to use hoverboards as part of a routine — famously rapper J Staxx and acrobatic group The Acrobots have had a take on this — using them in everything from original music videos to Justin Bieber dance tributes.

It’s hard not to be wowed by their skillful display.

They’re impressive, but compared to Feeding The Fish, they’re basic, with a capital B. 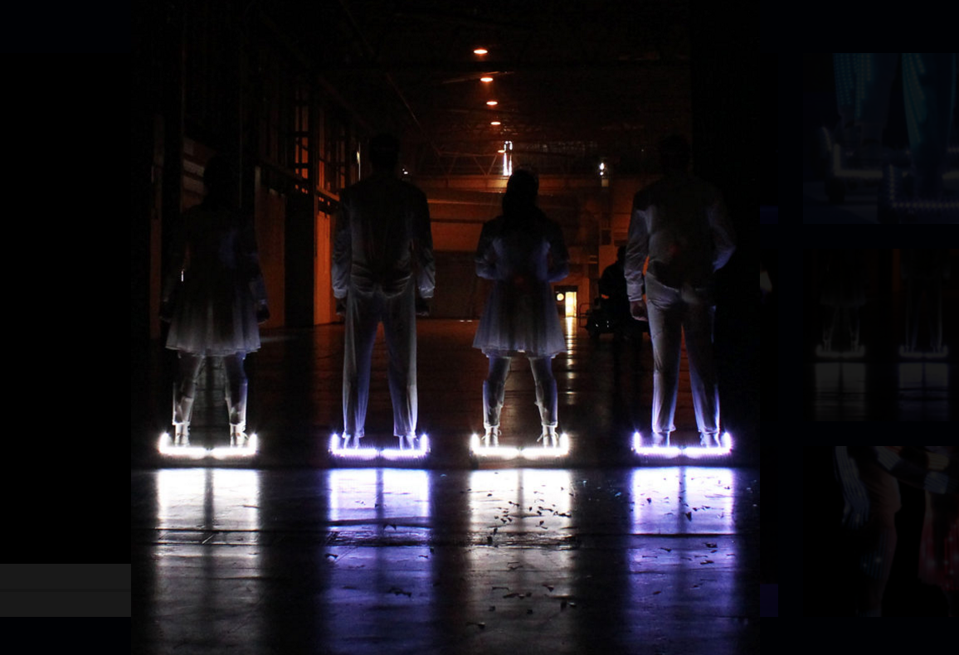 The best trick I can do on a hoverboard is slowly turning in circles, so I’m admittedly easy to impress, but the contrast between Bieber and Feeding The Fish is mindblowing. They’re sparkle central.

“The idea of putting our dancers on hoverboards really appealed to both sides of the company’s personality,” added Widing. “[We’re] exploring how we could build in our trademark in-house custom designed LED lighting and create a really unique style of performance that was fluid, beautiful, modern and fun.”

But unless you’re traveling abroad anytime soon, you’re unlikely to see them in action — so watch this video instead.